At 87 Music is Her Lifey 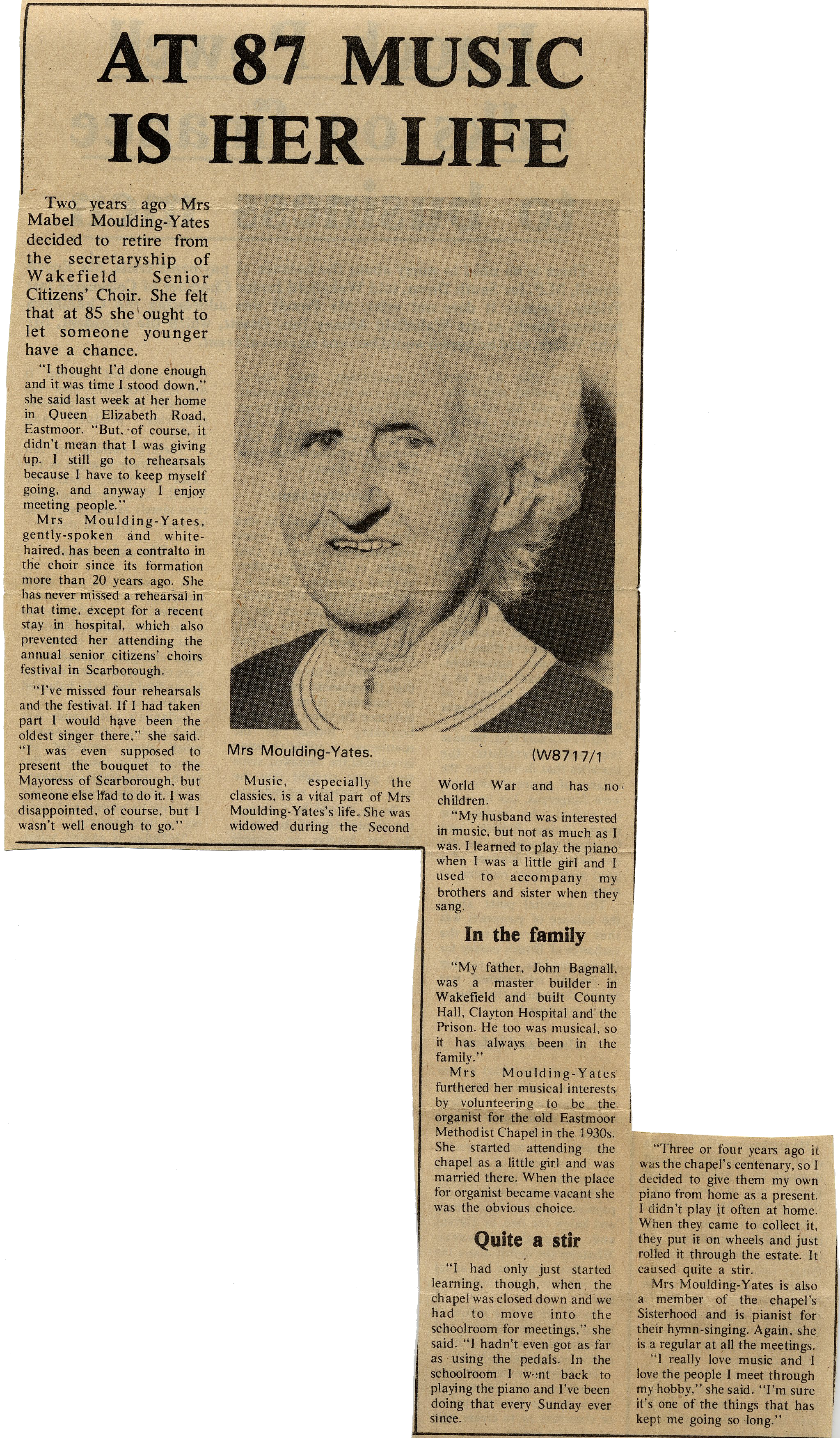 Two years ago Mrs Mabel Moulding-Yates decided to retire from the secretaryship of Wakefield Senior Citizens' Choir. She felt that at 85 years she ought to let someone younger have a chance. "I thought I'd done enough and it was time I stood down," she said last week at her home in Queen Elizabeth Road, Eastmoor. "But, of course, it didn't mean that I was giving up. I still go to rehearsals because I have to keep myself going, and anyway I enjoy meeting people." Mrs Moulding-Yates, gently-spoken and white-haired, has been a contralto in the choir since its formation more than 20 years ago. She has never missed a rehearsal in that time, except for a recent stay in hospital, which also prevented her attending the annual senior citizens' choirs festival in Scarborough.

"I've missed four rehearsals and the festival. If I had taken part I would have been the oldest singer there," she said "I was even supposed to present the bouquet to the Mayoress of Scarborough, but someone else had to do it. I was disappointed, of course, but I wasn't well enough to go."

Music, especially the classics, is a vital part of Mrs Moulding-Yates's life. She was widowed during the Second World War and has no children.

"My husband was interested in music, but not as much as I was. I learned to play the piano when I was a little girl and I used to accompany my brothers and sister when they sang.

"My father, John Bagnall was a master builder in Wakefield and built County Hall, Clayton Hospital and the Prison. He too was musical, so it has always been in the family."

Mrs Moulding-Yates furthered her musical interests by volunteering to be the organist for the old Eastmoor Methodist Chapel in the 1930s. She started attending the chapel as a little girl and was married there. When the place for organist became vacant she was the obvious choice.

"I had only just started learning, though, when the chapel was closed down and we had to move into the schoolroom for meetings," she said. "I hadn't even got as far as using the pedals. In the schoolroom I went back to playing the piano and I've been doing that every Sunday ever since.

Three or four years ago it was the chapels centenary, so I decided to give them my own piano from home as a present. I didn't play it often at home. When they came to collect it, they put it on wheels and just rolled it through the estate. It caused quite a stir.

Mrs Moulding-Yates is also a member of the chapel's Sisterhood and is pianist for their hymn-singing. Again, she is a regular at all the meetings.

"I really love music and I love the people I meet through my hobby," she said. "I'm sure it's one of the things that has kept me going so long."