From this address list, we can see that Bagnall Terrace is listed, also Rawling's Yard.

Bagnall (we know this is William and family) is listed at 108 Stanley Road.

This piece was written by Necia Potter and features on the Commanet website:

I always loved the old POST OFFICE, on STANLEY ROAD. It was formerly known as MOORE VILLA, and stood on the left hand edge of BAGNALL TERRACE. It's address was 108 STANLEY ROAD, and as our shop was 106, and was a ginnel and two doors away, means that PRICE'S SHOP and bungalow were new additions.

As MOORE VILLA it was lived in by the POTTER family and MR. POTTER was the one who altered the building to make it into a shop by adding a large front window, I believe it was electrical items he sold. I don't know if he retired, but I came to know them as the family who lived in the house at the back of the shop at 106, when my Granddad leased it as a lock-up shop, we still lived in ROYSTON then, and my uncle FREDDIE WILTSHIRE ran it.

Getting back to the POST OFFICE, when I came to live in our shop, in 1957, the POTTER family moved out and we lived in the house, A MR. THEWLIS had the POST OFFICE, though I think it was owned by MR. HARDWICK, who lodged with them, he also owned our shop.

As you went in the door, after walking past Bagnall terrace entrance and the large impressive house up a large set of steps, you could smell the age of the fittings, all wood. In front of you was a large glass case full of envelopes string ,ink and other stationery items, but to the right was the case I loved, full of pen gift sets and BASILDON BOND writing sets.

From the left corner MR. THEWLIS would appear, walking down a wooden staircase with handrail and come to the long wooden counter. It was always special for me, going in there, I suppose it was because it wasn't a place you went in every day, and I always felt quite grown-up, to be allowed to go and send a parcel.

The PIECE" was the area below our house, 18 RAWLINGS YARD, opposite the "FOX AND GRAPES" it was used as a parking area by the many ballroom dancers that came to the REX, In the 60. We used to look in the back of the cars and marvel at the beautiful dresses. 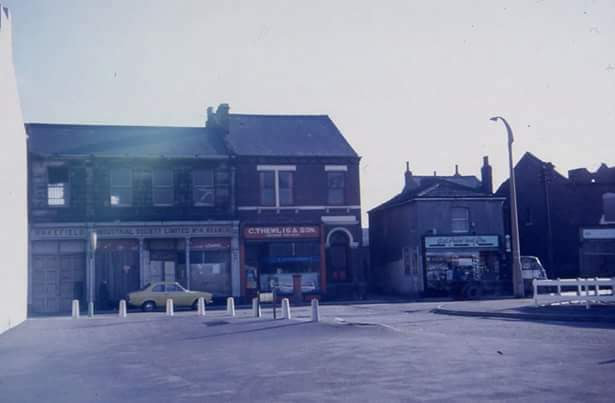