Modifications to the web Site

Modifications to the web page 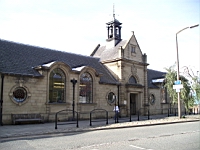 Had a call from the Mayors office in Wakefield. Mr Jubb told me that he'd tracked down two mallets presented by Messrs Bagnall Bros to the Mayor. One, made from ebony was presented (I think) at the laying of a foundation stone for Alverthorpe Working Mens club. A building I didn't know they had built. The inscription reads G & H Bagnall which would indicate that Messrs Bagnall Brothers were George and Harry Bagnall. The other mallet is made from ivory and is unfortnately damaged, but I assume it may be from the Drury Lane Library.

I may find out more when I visit Wakefield for further research (and to see the mallets) later this year.

I'm also hoping to meet up with Patrick Bagnall who has helped so much with information.